So I’ve been bunkering down in the Melbourne winter in front of 3D CAD programs designing various parts for the next bamboo bike. My aim is to reduce the amount of manual labour in the manufacture of the bikes and increase their quality, but still allow for individual geometries and styles. There’s a guy on Instructables who’s made a Custom 3D printed carbon fibre and aluminium bike and a lot of what he’s done is the genesis of my ideas for how to go about making custom molds that could be used with bamboo. There’s also this guy who’s made an amazingly detailed frame using 3D printed stainless steel lugs and carbon fibre poles. The triangle cutouts in the lugs are no doubt to save weight – as with 3D printing the amount of material you use is the main cost, and there’s limits to how thin walls can be (~3mm). So thick and chunky but with lots of holes in it seems to be the way to go.

This all sounds well and good, but there’s some caveats. The material properties of 3D printed stainless steel are not necessarily the same as regular steel. It’s infused with brass as part of the process, which, along with the process used, makes it much more brittle than normal. Regular stainless steel has an elongation of around 23%. 3D printed steel only has 2.3%. That’s a huge difference. There’s other 3D printers (like the one the guy used in the video above) that claim different material properties that are closer to normal stainless, but by the looks they’re also very expensive.  I’m hoping the material technology will get better in the next few years so that this won’t be an issue.

So far I’ve modelled and produced some cable-stops which are specifically designed for use with bamboo or carbon fibre frames. Here’s a close up pic of one made from plastic:

What sets it apart from a regular cable-stop is the curvature on the bottom of it is designed for thicker tubing and the tabs on either side have holes ready for wood screws so it can bolt right on. It’d probably be fitted with a dab of epoxy as well to help it stick properly.

I’ve designed it to be usable for both gear and brake cables, but I’ll have to do some strength testing on its use for the latter as there’s a lot more force going through a brake cable than a gear cable.

If you’d like some for your own project the cable-stops are available to buy directly from Shapeways, the 3D printer I’ve used. Plastic ones are $7 a pop plus postage. Stainless steel is a fair bit more.  I’ll soon be adding a double and triple stop for use along top-tubes.

I’ve also designed a head-tube badge and had it printed in both white and black.  I’ve coloured in the lettering on the white one to make it stand out, and I’ll probably do the same on the black (white lettering no doubt).

The next step is to start to model a set of lugs themselves. I want to be able to design them in such a way that the geometry can be changed easily and a new model produced from the changes in geometry semi-automatically. It’s a big ask, and there’s a lot of work involved, but stay tuned and it might just happen. 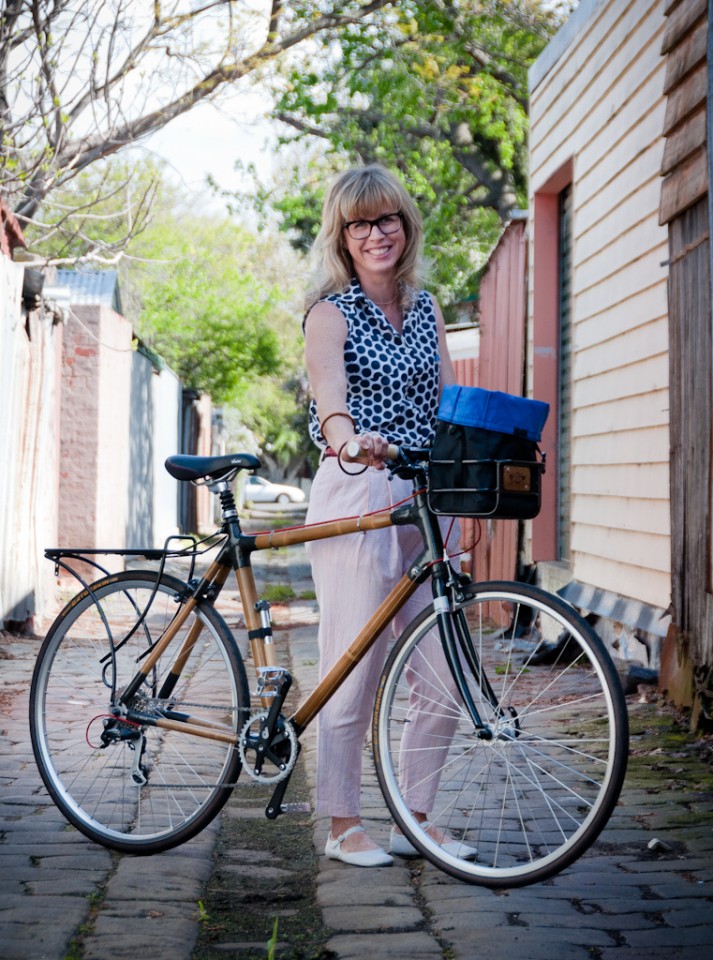 Ok not really, but the kind chaps at the Bicycle Peddler liked Daisy so much they thought she’d look good with some more bamboo on her! So they supplied these beautifully crafted accessories from Portland Design Works so she could look her best, carry more, and keep those tyres pumped! 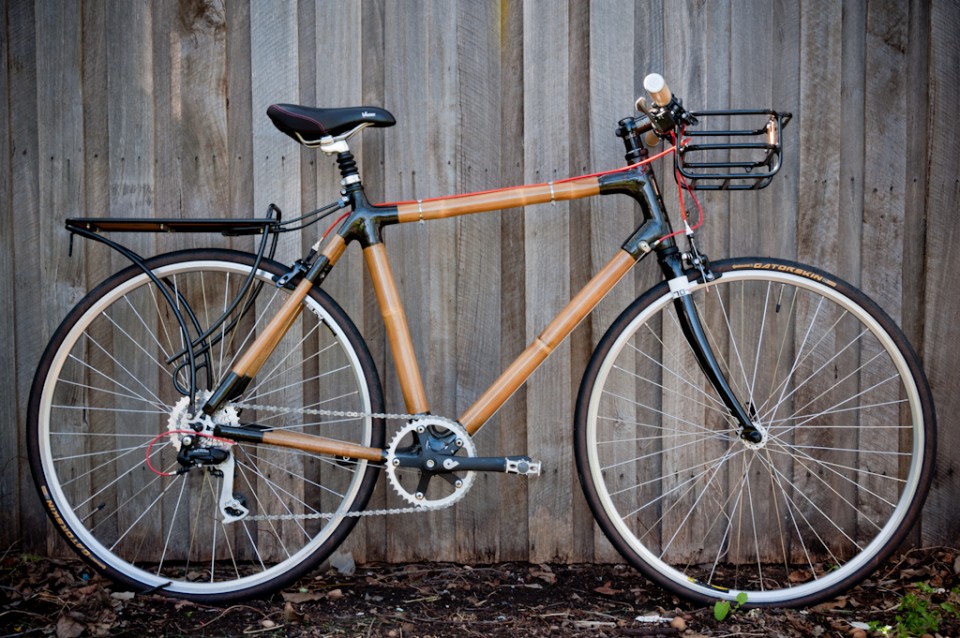 There’s a pannier rack with a bamboo deck, lock-on bamboo grips, a six-pack holding front basket with dry/cool bag and last but not least a beautiful bamboo handled pump – my favourite of the lot. The pump’s ultra-precise machining, ergonomic valve lever and magnetic handle latch are the sorts of touches that add up to something that just might make getting that inevitable puncture all the more bearable.

All this is being remarkably modelled by Ms Amy Cleggers (not her real name), who was keen to get frocked up and be shot with Daisy in the absence of Daisy’s real owner, Daisy. Are you following all that? Right. Good! Check out the pics!

Ok what else has been happening? Well, The Panda was shown at the Design Made Trade festival, which was a fantastic event all round. It was great rubbing shoulders with other frame builders and showing Melbournites that bicycles can be made locally and compete with the international market. I’ll post some complete pics of The Panda soon on her page, I’ve left those teaser pics up there too long!

Also, The Samurai is back in the jig with a replacement seat tube all cut. Once I’ve got her all aligned she’ll be wrapped up in some snug carbon and finished off beautifully. With spring weather almost here the workshop’s a more hospitable place to work and play. Hopefully it’ll entice me more than this grim and grey winter weather.

On with the show!