Over the course of the last few months I’ve heard a lot about the process for heat treating bamboo. People put it in ovens, attack it with butane torches, smoke it over fires or dry it out in kilns.

Why do they do it? The main reason is to rid the bamboo of any water content so it doesn’t contract or expand with temperatures as easily.  A secondary reason is the mottled burnt look kinda looks cool yeah?

Which method is best? I still don’t know. But here’s a few things I’ve picked up that might help. 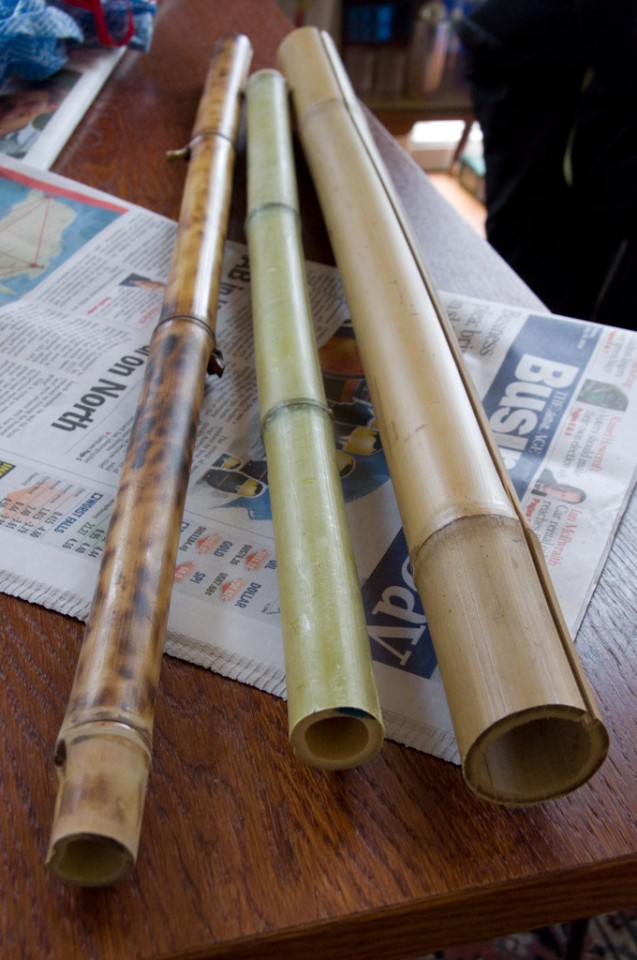 If you do plan on doing any of these heat treating methods you’ll need to puncture the nodes before heating. Failure to do so will cause a heat buildup in the pocket of air trapped between the nodes and eventually a big kaboom! I used a metal kebab skewer and hit it with the hammer to poke a small hole, but you could use a long drill bit, or a piece of metal rod etc. Try to maintain the integrity of the node as much as possible thou as they add strength to the pole!

If your bamboo is imported from another country (ie. China), like the piece of Tonkin pictured on the right above, it’s probably been dried already. Putting it in a 150degree oven for a few hours will do nothing but make it brittle and crack! It doesn’t necessarily crack whilst in the oven, it’s more likely after you take it out and it cools down. Two pieces I tried cracked in the middle of the night, long after they’d cooled. Woke the house up! I tried leaving it in the oven as it slowly cooled down, but that didn’t help either. More cracking.

Raising the temperature to over 200 degrees just ended up burning the bamboo I tried. I haven’t got a pic of it, but it basically turns to black charcoal that’s very weak and easy to break. Not good.

It’s kind of a logical conclusion, but I’ll explain it anyway. Green bamboo (A piece of green Aurea is pictured in the middle above) has lots of water in it, thou the older the culm the less water it has. You can put it in the oven and you’ll get most of the water out. You’ll see it steam out of the ends!

Waving a butane torch over the surface is a better way to go thou, as it not only gets rid of the water, but also the waxy surface of the bamboo gets burned off too. This is important if you’re planning on making epoxy stick to bamboo!  The piece of heat treated Aurea (pictured on the left above) used to be the same colour as the middle piece. Cool stuff.

I’ll see if I can record a video of the butane torch heat treating process, as it’s kinda good fun and fascinating to see the colours change. Bamboo’s like a chameleon!

If you’re after some real hard science about heat treating bamboo, check out this PDF about the subject in the field of making bamboo fishing rods. Long read!